DUBLIN THEATRE, A CASUALTY OF WAR 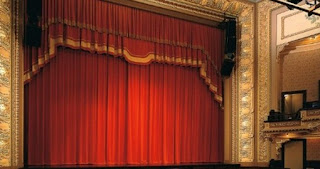 With the Easter Rising engulfing the city, the Dublin Theatre going public was one of the silent casualties of the Rising. With the outbreak of the rebellion on Easter Monday and martial law declared on the Tuesday, the stage lights went out for over two weeks in the city. But what could you have seen on the stages of the city during Easter Week 1916? The main theatre was The Theatre Royal on Hawkins Street and due on stage that week was vaudeville star Kitty Francis in a one act satire 'Mrs O'Malley's Reception' written by KF Welsh in 1914. 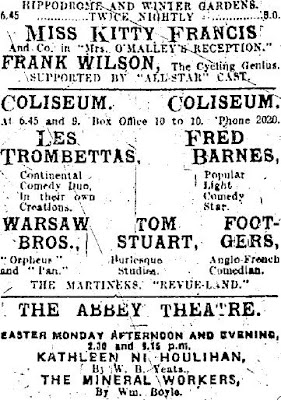 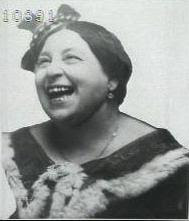 At the Empire known today as The Olympia, Dublin pantomime favourite Madge Clifton was starring in what was described as a musical melange 'Shall Us'. The show was produced by legendary Dublin music hall producer Barney Armstrong whose funeral in October 1921 was featured on British Pathe Newsreels.

At the Gaeity Theatre on Easter Monday night you could have enjoyed D'Oyly Carte Opera Company's production of Gilbert and Sullivan's comic opera 'The Gondoliers'. The Opera company who specialised in comic operas had been founded in 1875 by Richard D'Oyly Carte and toured extensively entertaining packed houses. 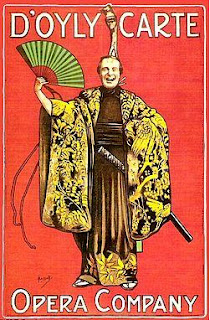 The Coliseum was a theatre located on Henry Street that was completely destroyed as British artillery targeted the rebels in the GPO. Due on stage at the Coliseum was Les Trombettas a male/female comedy duo with the male star known for his bird impressions were the stars. Sharing top of the bill was Fred Barnes who had earned success in 1907 with the hit tune 'The Black Sheep of the Family'. Barnes was topping bills all over the UK and Europe but with success came heavy drinking and his open gay lifestyle haunted him in later life dying in 1938 aged 53. 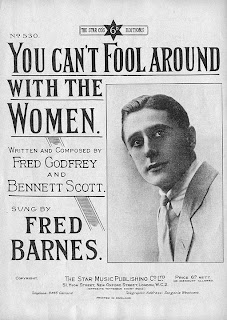 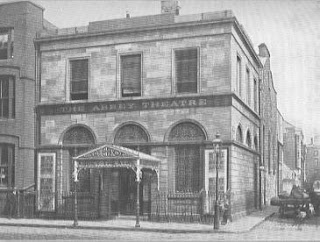 The nationalist aspiring Abbey Street was about to present WB Yeat's Kathleen Ni Houlihan but action on the streets of the city intervened with their plans. Many of the Abbey actors and staff were directly involved in the action. Sean Connolly an actor was killed in action on the first day of the Rising as his squad attempted to storm Dublin Castle the then seat of British Government in Ireland. Fellow actor Arthur Shields was a member of the GPO garrison and was directly involved in launching the rebels very own radio station. Shields would later star in Hollywood with his brother in The Quiet Man and in 'How Green is My Valley' with John Loder who had stood beside his General father on Moore Street as Pearse unconditionally surrendered. 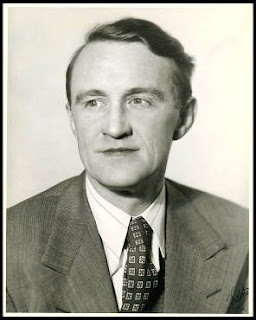 ABBEY THEATRE COMMEMORATION TO THOSE INVOLVED IN THE 1916 RISING

Some of the theatres were also due to show British propaganda war movies but the action had jumped from the silent screen to the reality of the streets of Dublin. 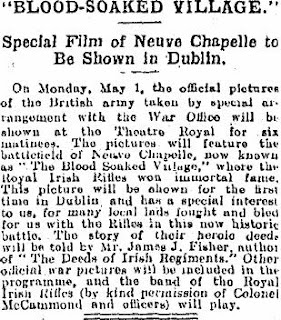 Another casualty was C.H. Hyland who was shot dead on Percy Place during the Battle of Mount Street Bridge when he went to assist injured British soldiers and was shot dead by a rebel sniper in Clanwilliam House. Hyland's father was manager of the Gaeity Theatre.
Posted by The Archivist at Monday, October 24, 2011