The first British POWs of the 1916 Easter Rising were not Irishmen or women but 22 German naval personnel who were captured by the British as The Aud attempted to land weapons from Germany off the Kerry Coast on Holy Thursday. Captured by British naval vessels, Captain Karl Spindler, two officers and 19 crew were taken from Cork to Dublin and onto Internment camps on the British mainland. Spindler was last man off the Aud and he scuttled the vessel in the mouth of Cork harbour. 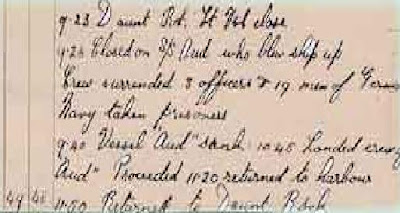 (An extract from the log of HMS Hood)
Posted by The Archivist at Tuesday, January 31, 2012