'James Fox (16), He was a member of Na Fianna. Killed in a trench in , near Royal College of Surgeons. His family lived in 6 James Street in 1911 census - the youngest of 6 children-Laurence, John, Margaret, Catherine, Elizabeth, James and 3 Thomas Walshe-a servant; along with Elizabeth and Laurence his parents. Buried in Glasnevin.'

Is the reference to James Fox in Joe Duffy's book Children of The Rising, a listing of those under 18 who lost their lives during the Easter Rising. I am sure the RTE broadcaster has taken this task very seriously and a large amount of research has gone into the story but their seems to be a major discrepancy in this listing. I am curious myself as James is listed as a Grocer's Assistant or barman to you and me but this has probably come about as a result of his father owning and running a hotel bar.

The following comes from Irishmedals.org

'Fox, James Joseph Citizen Army. Killed in Action on the 25th of April 1916 aged 18. James Fox was born in the Spencer Arms Hotel, Drumree, where his father was proprietor. He attended school in Dunshaughlin and later was educated by the Christian Brothers at Marino. He was stationed at the north side of St. Stephen’s Greens, near the Grafton Street Gate, in a trench opposite the United Service Club. Early on Tuesday morning he was returning to his post with a cup of tea when he was hit by a bullet fired from the direction of the Shelbourne Hotel. He was single and worked as a Grocer’s Assistant. He was a member of the 1st Battalion Dublin Brigade Irish Volunteer but requested to fight along side the Irish Citizen Army. He came from the area of .

"I was making for the ranks when Pat Fox caught my eye. This was the man I referred to earlier in my story dealing with Guard duty in Croydon Park during my early days in the Irish Citizen Army. He drew -55- a youth about nineteen years of age towards me saying, "Here is my lad; take him with you for the Irish Citizen Army. I am too old for the job". My reply was; "Right you are, Pat. Good-bye". Little did I know then that in less than twenty hours this youth was to breathe his last in this life in the cause of Ireland's freedom." 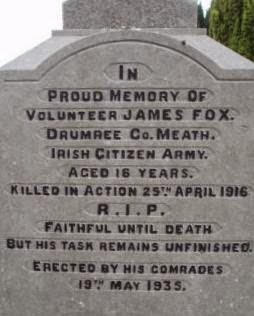 It is important that with the centenary fast approaching that all of us who believe in commemorating The Rising should endeavor to get as many of the facts correct as we can allowing for the passage of time.
Posted by The Archivist at Thursday, April 16, 2015