Every so often I pop into the Museum at Collins Barracks and wander around the 1916 exhibit. Every time I find something new, something to peak my interest, to further expand the history of the Rising and last week to be fair was no exception on a very wet day in Dublin's summertime. 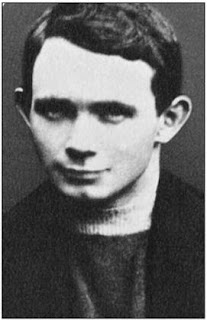 I was looking at the death certificates issued after the execution of some of the sixteen rebels and I wondered about some of the men who signed these certificates, their contribution even in a small way to the events of April/May 1916. I noticed Con Colbert's certificate and that it was signed by a Edmund Wm. Lynch. I wondered who he was, how he came to sign the certificate and what if any were his allegiances? 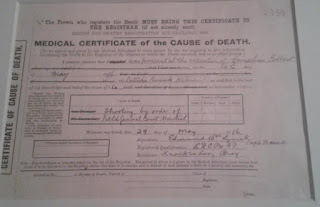 It was dated May 29th 1916, a full three weeks after Limerick man's execution. His qualification was listed as 'LRCPS' and his residence was listed as 'Knockeader, Bray'.

My next day off was a journey of 'near discovery'. Firstly I had no idea what the initials meant in the qualification so that was my first discovery - ' Licentiate of the Royal College of Physicians and Surgeons', a doctor. Where was 'Knockeader'? It was a house name on the Herbert Road in Bray not far from the Ardmore Studios. A check on the 1911 census showed the house as vacant, no Lynch living there. The last resident was a man called Thomas Acton. Strange!!

Then I visited one of my favourite research haunts, the Pearse Street library. The Thom's Directory from 1916 also listed the building as vacant and no Lynch living in the area. Back to the 1911 census and only three 'Edmund Lynch's' popped up and none of them fitted the bill. Perhaps Mr. Lynch was in London at the time studying at The Royal College.

I trawled the newspaper archives for a mention of Edmund Lynch but the polite 'sorry no results found' appeared on screen. Did Doctor Lynch perform any task in relation to the death of Con Colbert?

According to John O'Callaghan's book on Colbert as part of the 16 Lives series
'Con Colbert's death certificate might have been revealing, but as army procedure dictated it is not part of his court martial. Neither are those of Ceannt, Heuston or Mallin the others shot on 8 May. In fact the death certificate of most of the executed men are missing from their trial files. The certificates are referred to in some of the records but have been removed at a later point. This may have been for administrative purposes. It seems more likely that it was done to conceal information, perhaps the execution was botched.'

But Dr. Lynch would not escape me. He is listed in in 1910 Wicklow Commercial List as

LYNCH E W Newtownmountkennedy L.R.C.P.
but still the question why his name on the certificate and what was his connection to the execution?