News Before the News 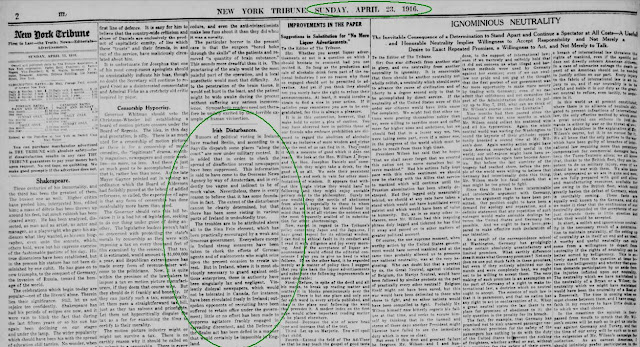 This is an interesting piece from the New York Tribune printed on Easter Sunday, the day BEFORE the Rising started and the paper was already reporting 'disturbances' in Dublin. 'Rumours of political rioting has reached Berlin' began the article which had been sent on the wires from Europe on Saturday. Despite disbelief by the newspaper in much of the news dispatched via Amsterdam they did conclude that there was at that stage serious rioting on the east coast of Ireland and that the areas were under military control.

The strange aspect to the story is that the report is attributed to the 'Overseas News Agency' which was in fact a British covert propaganda operation run by the British in the United States. The ONA would feed stories to the US media especially The New York Tribune who having picked up the story would in turn be the source for other media outlets lending credence to whatever story the British wanted published.
Posted by The Archivist at Monday, January 25, 2016