While much of the focus of possible unrest in in 1917 was on St Patrick’s Day and Easter weekend, enforced bans of gatherings muted much of these protests. June however was a month of discontent, widespread disorder and change. In February 1917 the father of the executed leader Joseph Plunkett, George Noble Plunkett known as Count Plunkett, had been elected as an anti Nationalist party MP representing the emerging Sinn Fein to for .  That bye election had been one of ten held in during 1917 three of them won by Sinn Fein candidates, the others elected were Joe McGuinness in and W T Cosgrave in Kilkenny. Former Unionist candidate Colonel G O’Callaghan Westropp in the 1892 Election in Clare wrote,
‘The gospel of Sinn Fein is essentially national and non party and it is wholly free from incitement to class or religious hatred and from bitterness of personalities and objectionable kind which formerly characterized similar contests. This clean fighting was so widely appreciated that it must be worth thousands of votes to Sinn Fein.’

When Eamon DeValera was selected as a candidate for East Clare, a newspaper editorial commented
‘The choice of a Sinn Feiner, serving time in prison, as member of Parliament for an Irish constituency caused no surprise to the London News. today, it says, is filled with "a passion of indignation" against unparalleled for a generation. The admission of Sir Edward Carson, leader of the rebellion, to the Lloyd George ministry, after the execution of the leader of the rebellion, has been a trump card to the Sinn Fein organs. Here it is necessary to point out that the British censor has rendered it practically impossible to give representative summaries of Irish opinion outside of the organs of and the organs Sinn Fein are printed by stealth to some extent.

Quotations from dailies on the subject of the Irish situation are not permitted in newspapers. The censorship in, London seems to be exercised through the war office which has ruled that passages In general articles dealing with military situations must be submitted to Its judgment before publication. being held by a British army of occupation under General Sir Bryan Mahon, comes within this ruling. All Sinn Fein organs come under the "seditious" class as defined by the War Office in . The result is a state of things painted in somewhat dramatic fashion by the Vossische Zeitung (Berlin), and as the British War Office permits no exploration of German dailies to this country, we must depend upon scraps translated Into Italian Socialist dailies and Swiss pro-German organs. Even the comments of the London Nation upon the Irish - situation have not been available of late, owing to the ban upon its exposition.

Private letters sent aboard from are opened in the post office. In spite of the difficulties In the way of arriving at the facts, certain details can be set down by putting together revelations supplied In British dailies and inferences in continental European dailies. Thus, there is no doubt about the magnitude of the recent riots in and in . Rebel emblems were displayed lately in both, those cities. The orders of the military ruler in , who, to all in tents and purposes, has superseded the civil government, are frequently set at flat defiance. He cannot prevent altogether the holding of meetings. Even large processions now and then wend their way through Irish towns before the military can be summoned insufficient strength to disperse them.’

In an attempt to appease the Irish and provide impetus to the proposed Irish Convention, the British authorities decided to begin releasing the prisoners they still had in captivity in after the failed Easter Rising. The month started with talk in the newspapers of the Convention that would they hoped once and for all solve the Irish question allowing the Irish to dictate the result. Tired of Irish ‘hooliganism’, the Cambrian News newspaper editorial commented,
‘The deliberations of the forthcoming Irish Convention will be watched with intense interest. Whatever the nature of the constitution and machinery devised to meet the needs and whim of , one thing is certain. Whatever is devised cannot possibly be worse than the autocratic rule of . Hitherto the fruits of that rule have been the agrarianism, the Fenianism, the whiteboyism, the Sinn Feinism, and the Carsonism that have cursed that unhappy island and mocked the earnest endeavours of the most enlightened section of British statesmen. Happily, to-day there is every indication that the impossibility of the continuance of present conditions have become apparent to every reasonable politician, with the exception of a small clique who, like the Bourbons. "learn nothing and forget nothing.’

On June 11th, a crowd estimated in newspapers of the day as 3,000, twice as many as the number of Volunteers who turned out for Easter Monday, gathered on the southside of the Liffey across from Liberty Hall. On May 15th, the British authorities in issued a closure order on Liberty Hall under the Defence of the Realm Act and a large force of the D.M.P. were on duty to prevent such gatherings. The crowd marched across overwhelming the police force. The Count Plunkett and Cathal Brugha arrived by car behind the throng pulling up in the front of the still badly damaged trade union headquarters. As the crowds surrounded the car with the recently elected MP, the police began to move in to disperse the illegal gathering and Brugha roared from the back seat,
‘The British Government won’t allow us our freedom of speech.’ 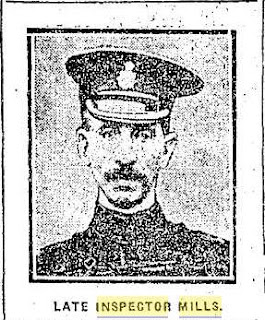 Brugha and Plunkett were arrested by Inspector John Mills of the Dublin Metropolitan Police. As Mills and his men marched the two men towards police station, a young lad from the crowd stepped forward and struck Mills with a hurley. Mills was taken to hospital as his men bolstered with reinforcements got their prisoners to the station. Westmeath born Mills, would become the first fatality since the ending of the Rising. While some newspaper reported that the policeman had been ‘bludgeoned to death’, others including Sinn Fein supporters in Offaly were calling for ‘three cheers for the man with the hurley’. It seems more likely from witness statements that the fatal blow was unintentional and was simply an attempt by the crowd to loosen the grip they had on the arrested men.

A day later the leader of the Nationalist party John Redmond would lose his brother William and MP for East Clare who was killed for the British on the Western Front. His seat would be won later by Eamon DeValera.

On June 18th amongst many of the prisoners released was Countess Markievicz who was accorded a heroes welcome when she landed at from Holyhead. She was taken to Liberty Hall, still the focus of the rebels where she was showered with ‘praise and bouquets’. Another rebel released in June was Thomas Ashe who would be rearrested in August in Longford and die while being force fed at the start of a hunger strike the following September.

As more rebels arrived back into arriving at Westland Row Railway station, there was more rioting in the city. On Thursday June 21st a crowd of an estimated five hundred gathered at ’s Hill and began to attack the homes of convalescing British soldiers many of them who had either Union Jacks in their windows or flying from the roofs. They then arrived in and entered the ruins of the GPO and unfurled a Republican flag from the roof. The police again moved in and arrested eight men and five women. Three of the men appeared in court but were released by the magistrate in an attempt not to inflame the situation in the city.

The trouble wasn’t just limited to , was engulfed by rioting especially serious on June 24th when one man was reported dead when the military opened fire with machine guns after the police failed to disperse the rioters. But according to Laurence Nugent’s Bureau of Military History witness statement,
‘At the end of June at a demonstration in to celebrate the homecoming of the Irish prisoners from British jails, the military were called out and ordered to use their bayonets. One man was killed and a large number were injured. Several of the police were injured, including D.I. Swanzy. Union Jacks were pulled down and the jail was attacked. At a public enquiry later it was found that the police and separation allowance people had caused the riot’.

As in the released prisoners arrived at ’s main railway station and proceeded to parade to a demonstration in the centre of the city. The police backed up by the military attempted to stop the seditious speeches and running battles began on the streets. The police baton charged and more fatally bayonet charged. Thirty year old Abraham Allen, a labourer married to Hannah with one child, lived at 2 North Mall. At quarter past eight Allen left the family home with his child to see what was going on, as events began to spiral out of control on the street, he sent the child home to his mother.

At the inquest into his death local woman Ellen McCarthy said she answered a knock on her door in and Allen was slumped bleeding profusely from a wound to his thigh, he had been bayoneted on the corner of . He was taken to the local infirmary but died of his wounds. His funeral was one of the biggest seen in with a cortege that stretched the entire length of . 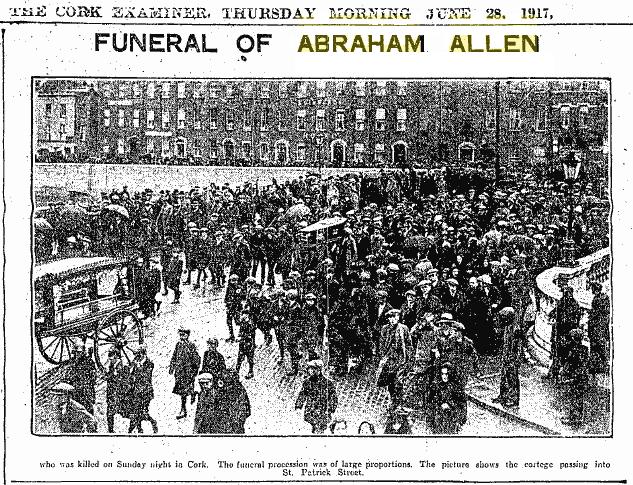 On the 26th, Sinn Fein members smashed windows in the city and re opened their drill hall on that had been closed by the British authorities after the Rising.

During the month while the Archbishop of Dublin Reverend William Walsh was receiving plaudits for his stand against partition the ordinary Dubliners was suffering as bread process increased by a half penny to 6d for two pounds and there was a major sugar shortage in the city. Beer prices had also increased as production was cut by order of the British as part of the war effort as the grains were being sent to the front. It was reported that Donegal was in the grips of a famine.

Sinn Fein who was now emerging as the real force in Irish politics was pursing a policy of absenteeism, civil disobedience and violence and would abandon theirs and Arthur Griffith’s policy of Dual Monarchy by the end of the year after the Sinn Fein Ard Fheis. Part of this civil disobedience was attempting to disrupt British food supplies leaving to the Western Front and in June 400 dock workers were on strike supported by the Trade Union movement in Liberty Hall.
Posted by The Archivist at Thursday, February 02, 2017