The 1916 Easter Rising generated a generation of Irish leaders and statesmen but as a small island we have punched well above our weight providing statesmen for nations across the world.                    This series published everyday over the next two weeks looks at their stories.

Episode Four - The Premier's of the Australian State of Victoria


Born in Ballinahow, County Tipperary John O’Shanassy would become the Australian state of Victoria’s second Premier. He initially held the post for a month March – April 1857 but his Government fell and he was replaced as Premier by the man he himself had replaced William Haines. On March 10th 1858 he once again became Premier of Victoria and a powerful Irish Catholic alliance dominated a mainly protestant Victoria with O’Shanassy’s Deputy Premier Charles Gavin Duffy. This led to sectarian tensions in the state but relations between the two men deteriorated as Irish politics came between the two politicians, the two men on opposite sides of the 1848 Irish Rebellion. 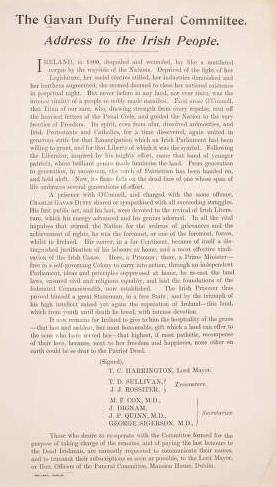 Their Government fell in October 1859 but O’Shanassy was back in the Premier’s seat one final time from14th November 1861 to 27 June 1863. In 1866 he returned briefly to Ireland where he was presented with a banquet ‘fit for a king’ in his native Tipperary. He was asked by the Cork Examiner if he had seen any change in Ireland since he had departed the newspaper reported,
'When a man returned to Ireland after a long absence, a natural question was, do you see any great change in the country? He answered at once 'I do.' He saw the agricultural position of the country was better than when he left it. He saw an improved price for labour, making a very considerable difference in the condition of the labouring population. He saw railways opened, and an excellent system of roads, which, were a great improvement upon what existed when he was there before. And he saw, what was peculiarly pleasing that Ireland had been complimented by politicians on every side because in the matter of ordinary crime her calendar was almost a blank. He had also noticed a marked development in ecclesiastical architecture in this country — the united zeal of the people and their pastors building magnificent churches, that were strong proofs of the sincerity of religion conviction of those who worshipped in them. In social matters, too, he saw marked progress, for now men of every shade of opinion, religious and political, could come together to promote a common object. ‘

He retired from the Victoria State Parliament in February 1883, shortly before his death in May of that year in Boroondara, Victoria, Australia.

Having served as Deputy Premier under O’Shanassy, Gavin Duffy would go on to be the 8th Premier of Victoria with a history of rebellion left behind in Ireland before his departure to Australia.  Duffy was born on Dublin Street, Monaghan Town, and the son of a shopkeeper. Both his parents died while he was still a child and his uncle, Fr James Duffy, who was the parish priest of Castleblaney became his guardian for a number of years with an education achieved in Belfast. Gavan Duffy was one of the founders of The Nation and became its first editor; the two others were Thomas Davis and John Dillon, who would later become Young Irelanders. All three were members of Daniel O’Connell’s Repeal campaign. The paper, under Gavan Duffy, transformed from a literary voice into a "rebellious organisation"

As a result of The Nation's support for Repeal, Gavan Duffy, as owner, was arrested and convicted of seditious conspiracy as the result of a Monster political Meeting that was planned for Clontarf in North Dublin city. This was also a period of rebellion with the Young Irelanders 1848 rising that centered on County Tipperary, more familiarly known today as the ‘Cabbage Patch rebellion’.

In 1852 he was elected an MP to the British House of Commons for the constituency of New Ross, retaining his seat until his resignation in November 1855. Tiring of the malaise that was Irish politics, Gavin Duffy decided to cross the world to Australia and arrived in Victoria State. He was feted when he arrived and a public campaign changed the rules for those who could be elected to the state legislature. In 1856 Gavin Duffy entered Victorian politics being elected for the constituency of Villiers and Heytesbury
.
In 1871 Duffy led the opposition in parliament to Premier James McCullough’s plan to introduce a property tax on the grounds that it unfairly penalised small farmers. When McCulloch's government was defeated on this issue, Duffy became Premier and Chief Secretary (June 1871 to June 1872). Victoria's finances were in a poor state and he was forced to introduce a tariff act to provide government revenue, despite his adherence to the then British principles of free trade.

As an Irish Catholic Premier he was very deeply unpopular with the Protestant majority in the state and Duffy was accused of favouring Catholics in government appointment. In June 1872 his government was defeated in the Assembly on a confidence motion allegedly motivated by sectarianism. He was succeeded as premier by the conservative James Francis and later resigned the leadership of the liberal party.


In 1874 he returned briefly to Ireland and was offered a seat by the Irish Parliamentary Party in the House of Commons but he declined returning to Victoria. In 1880 he left Australia for good and moved to the south of France. He died in 1903 having outlived three wives. His body was returned to Ireland for a large funeral through the streets of Dublin.
Posted by The Archivist at Sunday, January 14, 2018