NEW BOOK ON SALE NEXT WEEK

ON SALE NEXT WEEK 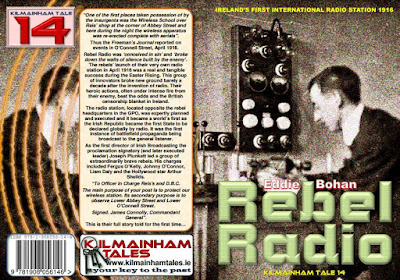 ‘One of the first places taken possession of by the insurgents was the Wireless school over Reis’ shop at the corner of Abbey Street and here during the night the wireless apparatus was re erected complete with aerials.
The Freeman Journal reports on events in O Connell Street April 1916

Rebel Radio was ‘conceived in sin’ and ‘broke down the walls of silence built by the enemy’. The rebels’ launch of their very own radio station in April 1916 was a real and tangible success of the Easter Rising. This group of innovators broke new ground barely a decade after the invention of radio. Their heroic actions often under intense fire from their enemy beat the odds and the British censorship blanket in .

The radio station, located opposite the rebel headquarters in the GPO, was expertly planned and executed and it became a world’s first as the became the first state to be declared globally by radio. It was the first instance of battlefield propaganda being broadcast to the general listener.

To Officer in Charge, Reis's and D.B.C.
The main purpose of your post is to protect our wireless station. Its secondary purpose is to observe and .
Signed. James Connolly, Commandant General.

This is the full story told for the first time….
Posted by The Archivist at Thursday, February 25, 2016