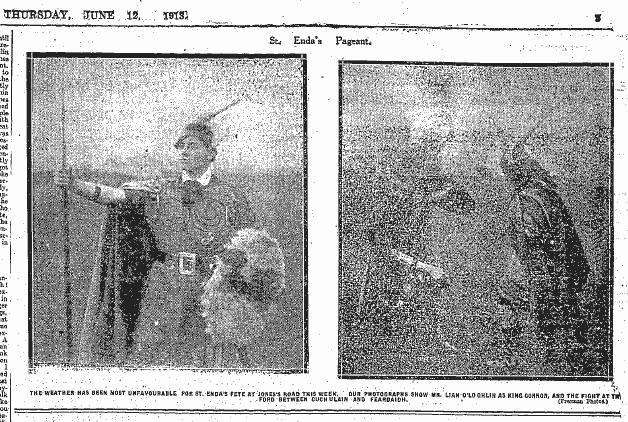 Many famous names over the decades have graced the field of dreams that is Croke Park, home of the GAA on Dublin's northside. Paudi O'Shea, Kevi Heffernan, Eddie Kerr and Henry Shefflin are just some of the names that have entered Irish sporting folklore but less well known is the fact that Eamonn Ceannt, Patrick and Willie Pearse have also appeared in Croke Park. 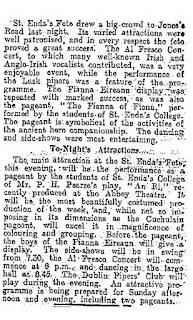 From June 9th to the 14th 1913 a pagent and fete was staged on the hallowed turf in aid of Pearse's school St. Enda's in Rathfarnham. With admission prices of 3d (three old pence) and 6d (half a schilling) special arc lights were installed for the night time shows.

The shows began at 7.30pm on June 9th with the opening ceremony performed by the future President of Ireland Douglas Hyde. First on stage was the St James Band followed by an al fresco concert that included the uileann pipe playing of Eamonn Ceannt.

Everything did not go according to plan on the first night as despite its staging during the summer rain affected proceedings and the show ended early. On another night there was a special display by Na Fianna Eireann. According to news reports on the day the fete was a success generating some welcome funds for the school in Rathfarnham. 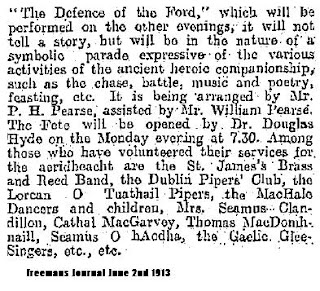 One final newspaper report did show that after the final night one of the arc lights was not extinguished properly and it started a fire that destroyed one of the wooden stands at Croke Park.