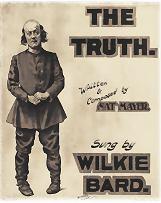 One year on from the momentous events of the Easter Rising and was still recovering, the centre of the city still a bomb site. April 9th was Easter Monday and was cold, windy with snow and sleet, a far cry from the sunny climate of Easter week. The British authorities had taken no chances and banned all outdoor gathering and processions to ward off trouble. The First World War continued and throughout 1917, Irishmen were still joining up. Many of those arrested after the Rising were still in prison in and was suffering from rationing, job losses and steep increases in both food and alcohol prices.   though is changing as the radical nationalism of Sinn Fein begins to replace the moderate Nationalism of Redmond’s Home Rule party.

The main page of the Sunday Independent barely mentioned and its only reference was to possible nationalisation of the Liquor industry in and due to wartime conditions. This was also leading to concern as many jobs were being lost at breweries and distilleries especially in as restrictions on production was imposed. Much of the news columns covered ’s declaration of war on the German Empire on April 6th. The Easter weekend had been a period of religious reflection with many businesses closed for the Holy Week.

The ban on meetings did not apply to indoor events and so the Dublin GAA annual convention went ahead as planned in the Mansion House. There was plenty of sport to occupy the mind but weather conditions reduced the attendance numbers at most events, which was a bonus on the Monday for theatres and cinemas.

The Grand National went ahead at Faiyhouse where Pay Only picked up the first prize of two hundred pounds. Second place despite all their efforts only won twenty pounds. There was whippet racing at , hockey in the , soccer matches in the Leinster Senior League and club GAA matches at and .

The back page of the Freeman’s Journal on Monday along with actions photos of the Louth v Wexford GAA match was the news that the eldest son of British Prime Minister Lloyd George, Major Richard Lloyd George had got married. But as the year anniversary arrived on Easter Monday the theatre and cinemas were busy.

The D’Oyly Carte theatre company whose run at the Gaiety Theatre had been shut down as events unfolded on and nearby St Stephen’s Green, were once again opening at the Gaiety with their production of The Gondoliers. The Theatre Royal’s acts on Monday night included Miss Marie Loftus, opera singer, George Forde, ventriloquist and Fred Curran, comedian who would become the opening act for Harry Houdini. The Abbey Theatre was performing G B Shaw’s ‘ John Bulls Other Island’ with Fred Donovan playing the role of Father Keegan. The Empire show was headlined by Miss Victoria Monks, while the had Cooper and Lait topping the bill with comedian J B Strain. At the the play ‘Under Two Flags’ was being performed.

Cinema was also growing rapidly although many of the cinemas in the centre of the city had been destroyed during the Rising bombardment. The Grafton Picture House
was showing ‘The Majesty of the Law’ accompanied by a performance by a visiting Russian violinist. The Pillar Picture House had Charlie Chaplin’s ‘The Pawnshop’. Across various Chaplin movies were on Easter Monday. At Mullingar you could have caught his film ‘in two parts’ The Fireman while Police was being shown at the Coliseum in .

On Easter Monday just before midday a crowd gathered outside the ruins of the GPO and a rebel flag was hoisted on a temporary flagpole at the corner of the building. It was lowered to half mast the stroke of one. As the police attempted to arrest those with flags, they were attacked and stones thrown gathered from the rubble of the street. There were a number of baton charges on and Eden Quay with skirmishes continuing into the afternoon. The newspapers reported that a heaviy snowfall just after 10pm cleared the street of the ‘rowdies’. The only mention in Monday’s paper of any republican activities was a gathering of about a hundred ladies in Glasnevin where they laid wreaths on the graves of Volunteers killing during the Rising.

One strange quirk of the weekend in Dundalk related to the merging of Irish time and time in October 1916 when Catholic churches in the town advertised Mass in Irish Time while the Protestant services were advertised in the new time leading to confusion in the town.
Posted by The Archivist at Sunday, May 28, 2017