When the battle between the Michael Malone led group of rebels at Mount Street Bridge and the arriving reinforcements of the Sherwood Foresters ended and the general surrender order was delivered to DeValera at Boland's Mills, the prisoners from the 3rd Battalion of the Irish Volunteers were marched not into the city centre with much of the other forces but out towards Ballsbridge and the grounds of the RDS.


According to Andrew McDonnell of Rathgar, in his witness statement.

We were left in the stalls on the damp ground for some days. Meals were a movable feast: some days we got food and on others we got none. We were taken to the toilet under armed escort. This was at the end of the road near the gate leading on to . We were objects of interest to the British troops who were in the stables opposite and came to grin at us over the half door of the stall. One of the British soldiers was black, a negro and his broad grin was most annoying until a well aimed tobacco spit made him give the half door a wide berth.

It must have been a strange sight for the exhausted combatants to espy a coloured gentleman in British military uniform in what at the time would have been a very white almost Anglo Saxon island.

The main protagonists of World War One all had their colonies and many of the British servicemen of colour were from the Caribbean so it is probably that the soldier at the RDS especially with his happy outlook was most likely from the opposite side of the Atlantic. By the end of WW1, 15,000 West Indians had joined and served in the British Army. As rebels are marched along the quays of the River Liffey towards ship in Dublin port to take them to prison and internment camps a photograph taken as they crossed O'Connell Bridge may have snapped that very same British soldier acting most likely as an ADC to his commandant on horseback. 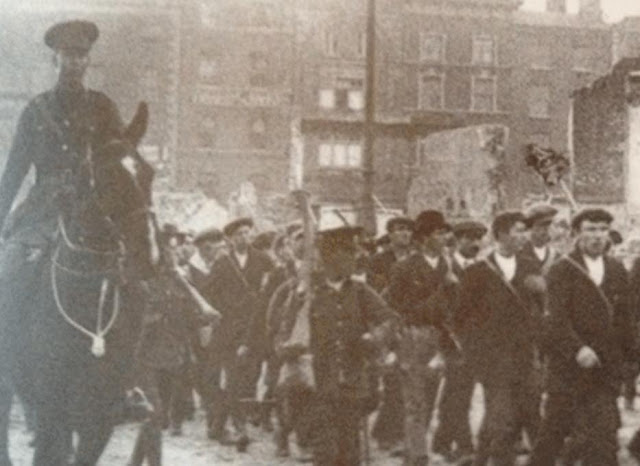