Summerhill Publican Mentioned in the House of Commons 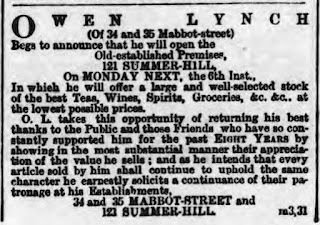 There are not many public houses who have found themselves at the heart of political debate and even fewer who have been mentioned on the floor of the House of Commons at . But in March 1871 this is exactly what happened.

Cavan born Charles Lynch was running a public house at 121 Summerhill on the corner of Summerhill and . In early March his brother Owen was taking over the business. Owen was already running a pub on . As it required today the licence needed to be transferred from one brother to the other. On March 6th 1871 Owen had his officially opening at Summerhill. His pub was full and as was and is customary the new publican provided free beer, wine and spirits for those who were invited to the event.

Closing time in 1871 was 10 p.m. and shortly after that hour the local police arrived at the door. Police Constable Mark Byrne of C Division of the Dublin Metropolitan Police stated after that when he arrived at the door of the pub he ‘found it crammed full of people who were drinking and they were very disorderly’. Another Constable stated that many of the patrons were ‘in a drunken state and quarreling with each other’ although they were packed so tightly in that they had no space to fight. The policemen asked the Lynch’s to clear their pub but they either refused or were under the impression that they were to be given a little bit of leeway from the local inspector. Several customers who had become belligerent were arrested and taken to the police station. The aftermath of the raid was that Charles Lynch was fined one guinea while it appeared that the licence had not in fact been transferred and therefore Owen Lynch opened his pub without a licence and was illegally selling alcohol drinks. Owen was fined five guineas.

One of those arrested was local labourer thirty six year old William Keely who the police stated was arrested for his own protection as he was highly intoxicated. At 2 a.m. in the police cell he became quite ill and the decision was made to transfer him by police horse and car to the but he was dead on arrival. A post mortem was performed by Doctor R W Egan and death was caused by ‘apoplexy the result of excessive drinking’. At an inquest it was revealed that Keely had drunk a pint of whiskey which he, like most of the others in the pub that night, had received gratis.

On March 8th 1871 reports appeared in the Freeman Journal and the news that Keely had died basically from alcoholic poisoning with free drink given out at a pub opening which seemed to be commonplace in Dublin at the time caused a public outcry. was a city struggling with a drink problem and topped with the rise of the Temperance movement throughout the mid 19th Century, this story was big news, so big in fact on March 16th it reached the floor of the House of Commons. A bill was proceeding through Parliament attempting to limit drinking excesses by decreasing the number of licences across Britain and and increasing penalties for drunken behaviour. The Dublin M.P. Jonathan Pim believed that putting an end to the practice of giving out free drink at events such as pub openings should be included in the new piece of legislation, The Licensing Bill (), Excessive Drinking in Public Places 1871.

He posed a question to the then Chief Secretary to the Marquis of Hartington.
In Hansard’s historic record of debates Mr Pim
asked the Chief Secretary for Ireland, Whether his attention has been called to the circumstances connected with the death of William Keely, who, as stated in the "Dublin Freeman's Journal" of March 8th, died of apoplexy after drinking "more than a pint of new whiskey," given him In a public house which was re-opened by a new proprietor, who, as it seems is usual with the trade on such occasions, supplied to all comers 'drinks' gratis: whether the Law affords any means of preventing such an objectionable mode of advertising the opening of a new public house, or of punishing the trader who supplies spirits in such quantity as to be equivalent to poison; and whether, in case the present Law does not afford the means of prevention or of punishment, he will consider the subject with the view of providing a remedy under the Licensing Bill which is intended to be brought in for Ireland?’

to which the Chief Secretary replied

‘his attention had been called to the circumstances. With reference to the statement that the man had drunk more than a pint of new whiskey, he was informed that nothing of the kind was proved at the coroner's inquest. No doubt Keely had drunk to great excess at the opening of this house, and being an habitual drunkard he died in the course of the night. The explanation made by his hon. Friend rendered it unnecessary for him to add that the most respectable publicans in Dublin entirely denied that any such custom as free drinking prevailed on the opening of new public houses. The law did afford the means of punishing a person guilty of the irregularity which was said to have occurred on that occasion. He had a report from the police to the effect that the proprietor had been summoned for allowing drunken and disorderly conduct in his house. The house had been placed under restriction, and the proprietor had since left it, and given it up to another man. No doubt the law could provide effectual means of making parties so offending amenable.’

The case slowly drifted away and the practice of free drinks at pub openings still prevails today in .
Posted by The Archivist at Sunday, November 12, 2017