The 1916 Rising and The Public House

The Irish are synonymous with the consumption of alcohol and having a good time in our pubs and bars but have you ever wondered about the connection between beer and spirits and the foundation of the State. Alcohol, the production, the service or the consumption of alcohol has played a key role in Irish affairs since the iconic and momentous events of The Easter Rising in 1916. Public houses were at the heart of the action unfolding on the streets of . 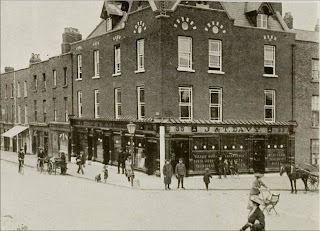 As the rebels secured their headquarters in the GPO a detachment on men were sent to seize buildings in . They attempted to gain entry to Mooney’s pub but the manager slammed the door in their faces and not even a shot at the lock could gain entry. They instead seized The Ship Tavern which they had been familiar with as it had been a magnet for nationalists. But the attitude of the rebels towards drink is best served by William Daly,
“In passing, I wish to record with pride that a few of the men I was In company with, although hardened drinkers, were stationed in the Ship Tavern, and had the taking of anything that was there, not touch anything and refused the offerings of the barmen”
As a consequence of the British bombardment during Easter Week, the Ship was completely destroyed.

A group of rebels seized J.T. Davy’s pub at . Their mission was to delay reinforcements from the Rathmines Barracks. Once they were in control the next couple of hours were taken up with securing the premises and setting up sniping positions. They used whatever they could to barricade the windows including most of Davy’s family furniture.

The British sent some soldiers in the direction of Portobello Bridge three hundred yards from the gates of the barracks but as soon as they got close the rebels opened fire pinning them down in the gardens and the doorways along Rathmines Road. The soldiers eventually made their way to the small wall on the opposite side of the . The police arrived and attempted to keep curious onlookers out of harms way and the firing continued intermittently caused even lock keeper Joseph Parsons to peer out his window and watch the commotion. Against the odds Superintendant Kiernan and Sergeant Crosbie of the Dublin Metropolitan Police kept the ever increasing crowd back from the frontline action.

Most of the rebels were based on the second floor as the third floor view was obstructed by advertising hoarding along the canal. Gunfire was indiscriminate with the gas lamps on the bridge taking a number of direct hits. Late on Monday evening the Army crouched down in strict military fashion behind the canal walls on the southern side, the first line lying on their stomachs, the second kneeling behind with their commander standing tall behind them directing their fire. A machine gun was wheeled up from the barracks and positioned on the bridge and began almost immediately to pepper the building continuing for nearly two hours.

Hundreds of rounds were fired at the pub until a ceasefire was ordered as soon as the British realised that there was no returning fire coming from the pub. Perhaps they were all wounded or dead. The order was given to enter the building breaking through the glass plate windows on the ground floor. When they entered neither rebel nor corpse was found. With their intimate knowledge of the pub the rebels had broken through the cellar walls into the adjoining buildings and eventually into a nearby lane making good their escape long before the British had opened fire on the building. Their mission had been a success as they held up the British long enough to allow the rebels in the centre city to reinforce their defences and barricades.

On Monday night rebels seized Delahunt’s Pub at . The raiding party was led by Lieutenant Shiels with the aid of George Heuston of E Company 2nd Battalion who was a barman in Delahunt’s. He was one of the lucky rebels not to be captured in the aftermath of the Rising. When the British troops attacked the position Richard O’Carroll was fatally wounded. He had been travelling along when he was pulled from his motor cycle by a British officer Captain Bowen-Colthurst and shot. He died nine days later in the . 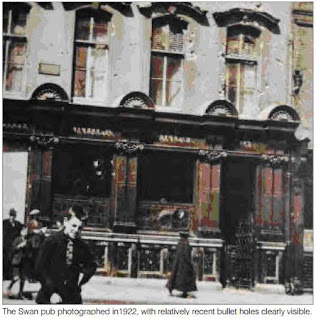 Further down the street opposite Jacobs Factory was the Swan Pub and it too was seized.
“Orders were also given that we were to burrow through from Jacob's to a public house at the corner facing . We had two masons in our party and the burrowing was made easy. Strict instructions were given that no Volunteer was to take any drink from the public house. And although I am not a drinking man myself I must say that this order was strictly obeyed.”
Michael Molloy Witness Statement

Around the corner on beside the which had been captured by Michael Mallin, Phillip Little’s pub was seized at 8pm on that Easter Monday by Sergeant James Kelly and some of the retreating forces from Davy’s Pub and Harcourt Street Railway station. Laurence Nugent’s Witness Statement
“They also evacuated Davy's on and station as these two posts were attacked from Portobello Barracks and there were only a few men to defend them. The early evacuation of Little's public house at the corner seemed strange as if it were attacked there was a good line of retreat to the . The Citizen Army men who occupied these posts were by Wednesday confined to the .” 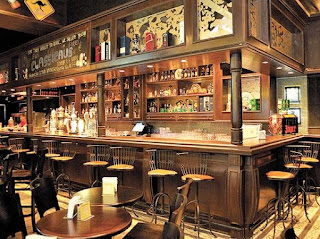 Nearby Bowe’s pub on was seized by the rebels and used as a sniping position but was abruptly abandoned leaving the valuable weapons behind and it was left to member of Cumman NaBan to retrieve them. Annie O’Brien takes up the story,
“Word came in from a sniping post, a publichouse called Bowe's at the corner of and Coppinger Row and that the two snipers at that post had evacuated it, leaving their arms behind them, and they sent word to to have their arms collected and put into safe keeping. The two of us went to the post and found the house locked up. We went to the house next door where we found a friendly man who showed us up to the skylight which we got through and on to the roof of the publichouse. Its skylight was a bit small and only my sister, who was small, was able to get through. She went down and opened the door of the publichouse for the rest of us. We had to search the whole of the house for the arms and at last we found the two loaded rifles in an office”

Once the rebel garrison had secured their headquarters at the GPO on , the poor of the city slums on the Northside of the city began to riot and loot. Padraig Pearse attempted to stop this and sent out a patrol to expel the looters. Two men crossed onto and ‘banished’ a number of troublemakers but as they made their way back towards their HQ they heard noises from inside Meagher’s pub. They looked in but initially saw the premises as deserted. As they were walking out they could hear roaring and shouting coming from the direction of the cellar. The went behind the counter and noticed the trap door to the cellar open and candle light coming from the cellar. One of the Volunteers took the first steps down into the cellar and saw three women known as ‘shawlies’ drunk out of their heads. They were drinking the wine from saucers. He roared at them ‘in the name of the you need to leave this pub and go home to your families’. There was a moment of silence followed by a barrage of verbal abuse and a shower of bottles. The rattled rebel scarpered back up the steps and he and his colleague returned to the safety of the GPO. They reported the events to Pearse who asked them why they had not followed orders and ejected the women,
‘We would rather fight the British guns than tackle those three auld ones’.

On the Northside of the city O’Reilly’s now The Tap pub on was seized by the rebels to slow the progress of the British troops from the Royal Barracks. There was an intensive battle for the building with the British sustaining many casualties. 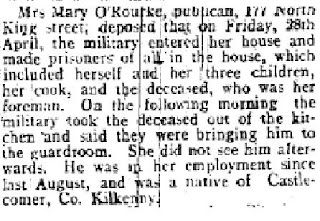 The British Army seized Egan’s public house in which they used as a firing position to attack and massacre. The soldiers spent considerable time breaking through the wall of the houses and by the time they reached the rebel’s position the rebels had gone. In their frustration at not catching the rebels the soldiers turned their anger on the residents of . Fifteen men and boys were either shot or bayoneted to death. Included amongst the fatalities was Patrick Bealen, who had been employed as manager at Mary O'Rourke's licensed house, , , and James Healy employed at the nearby Jameson's Distillery. Their bullet riddled bodies had both been disinterred on 10th May in the cellar of O’Rourke’s pub at by the sanitary authorities.

Lambe’s public house on now Meagher’s of Ballybough was seized by rebels attempting to halt the advance of British troops from a training camp on towards the centre of the city. They held the pub until they were ordered to fall back to the GPO.

One of the few battles outside was Enniscorthy which was seized by the Rebels. The Athenaeum theatre was made the Republicans’ headquarters, over which they flew the green, white and orange tricolour. All the public houses in the town were closed down and as Father Patrick Murphy, a priest who publicly blessed the rebels, recalled,
“During the four days of Republican rule, not a single person was under the influence of drink”.

According to Volunteer Thomas Doyle of Enniscorthy
“There was an order given that no publicans were to supply anyone with drink. That evening two men were caught in Loftus Porter's publichouse in Templeshannon. Mike Murphy (Toby) and Bernard Neill were arrested and the keys of the publichouse taken from the owner. His shop was locked up and the keys brought to headquarters.

Some of the pubs completely destroyed or severely damaged as a result of fire from both sides included Mooney’s, McGreevy’s and Moore’s on Eden Quay, J Humphrey’s and Fee’s on Moore Street, Farrell’s of Malboro Street, on Ushers Kavanagh’s and on Lower Bridgefoot Street the famous Brazen Head
“Smart and others used home-made grenades to set the public house on fire, in the hope that this would end this activity, which it apparently did. The pub was burnt out, with the Dublin Fire Brigade arriving too late to do anything about it.”
The Oval on was destroyed by the end of the week. The pub had been purchased in 1902 by John Egan and after a major refurbishment reopened in 1903. It was very popular with both the local journalists and with rebels in the lead up to the Rising. The pub remained closed for six years. 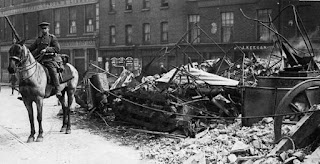 Today there are other Rising sites that have been turned into pubs including the Schoolhouse on which was at the heart of the battle of the nearby Bridge and a battlefield that saw the largest British casualties and The Grand Central on which was the location of the rebels radio station during the Rising.
Posted by The Archivist at Wednesday, May 27, 2015