With an advertised ‘cast of 500’ the GAA’s main event to commemorate the 50th anniversary of the Easter Rising in 1966 was ‘Seachtar Fear, Seacht La’ performed at . This specially commissioned pageant was written by Kerryman Bryan McMahon. The ninety minute show featured the lives of the signatories of the Proclamation and featured a young Niall Tobin in the role of Patrick Pearse. Supporting the dramatic roles was the music performed by The Artane Boys Band and the Black Raven pipe band. 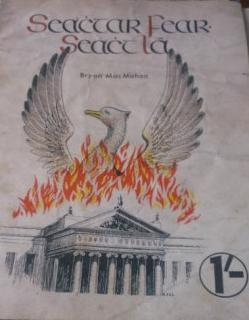 The show cost an estimated £6,000 to stage with admission costing five schillings. Beginning at 8.20pm nightly it was staged on three consecutive nights from St Patricks Day until the 19th of March. Initially there was an agreement that RTE would film the event for transmission but they failed to reach an agreement with the actors’ union equity and recording required an extra daytime show as the night time productions could not be recorded for television in those early days of Telifis Eireann.

This led to much tit for tat criticism but eventually an agreement was reached and an extra show was performed in on Saturday April 2nd with transmission the following night. The show was also performed in and at in .

In 2016 ‘Seachtar Fear - Seacht Lá’ will form the centrepiece of the ceremonies marking the official opening of the Fleadh Cheoil na hEireann on Sunday, 14th August 2016.   The county grounds of in Clare will play host to the event.
Posted by The Archivist at Saturday, March 19, 2016