Welcome to part two of our look at some of the Pubs of Ringsend. In 2022 a Walking Tour will commence bringing you the colourful history of the many pubs and tales of Ringsend or Raytown as the locals know it. There were some early public houses in Ringsend even in the days when Oliver Crowell landed there in August 1649 with twelve thousand troops. Despite his proclamation against drink, pub life continued. Having been seasick on the journey across the Irish Sea, Cromwell and some of his Lieutenants went into the first tavern they met in Ringsend, plied themselves with drink and then closed all the taverns in the village. 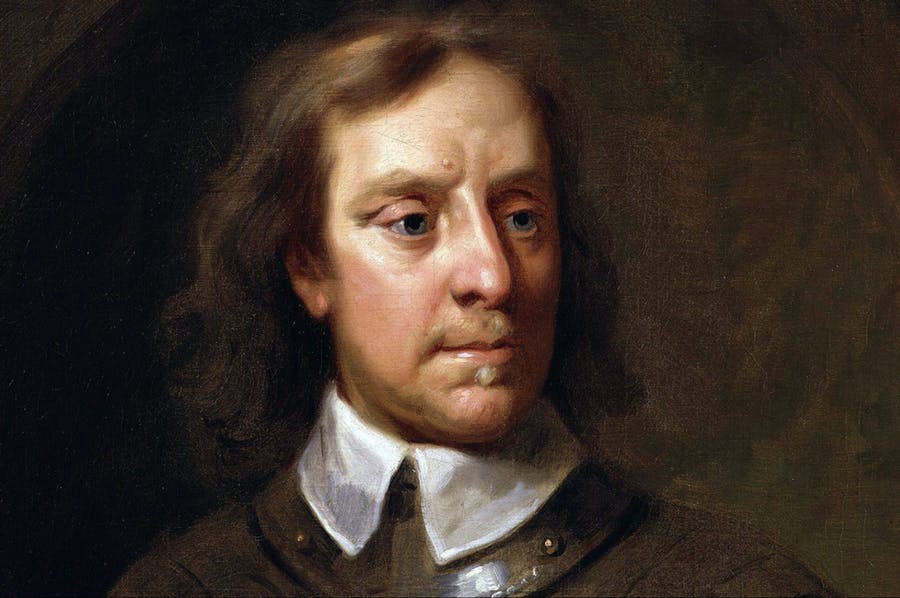 It was said that at one stage by the mid eighteenth century every third house in Ringsend was an alehouse. One of the earliest infamous pubs was The Kings Head Tavern on Thorncastle Street. In 1683 the tavern was run by a man called Brennan and found itself under surveillance from the Crown Forces when three cousins of his stayed in the Tavern. The Brennan’s Patrick and James from Kilkenny had been on the run after a series of highway robberies and were the number one target of the Chief Justice John Keating. They had been arrested for murder and robbery, tried, found guilty and sentenced to hang but as they reached the scaffold they were rescued by compatriots and went on the run. Having stayed a number of nights enjoying the hospitality of the Tavern, they became aware that they were being targeted by spies and the brothers, along with a young cousin Daniel, slipped quietly out to a ship in the Basin and escaped to Britain. They arrived in Chester but unluckily for them, one of their victims recognised the robbers and they were arrested. They bribed their warders and escaped once more and made their way back to Ireland where they stayed at liberty in their native Kilkenny.

In 1698, British writer John Dunston travelled throughout Ireland and as his tour ended, he wrote that,

‘I had very agreeable company in Ringsend and was nobly treated at the King’s Head.’

By the mid eighteenth century another public house was enjoying success. Known as The Sign of the Good Woman it was operated by a Mrs L’Swaire. It made its name with food and drink and was a popular for its Poolbeg Oysters. The Oysters were fished for and supplied at the time by Messers Bunit and Simpson, whose name would later adorn a pub for many years in the twentieth century on Bridge Street in Ringsend. 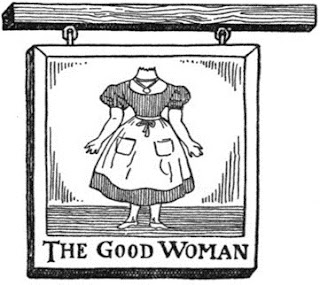 The name of a Ringsend tavern known as the Good Woman would also appear in James Joyce’s work Finnegan’s Wake[1]. In it he wrote

‘and the foretaste of the Dun Bank pearl mothers and the boy to wash down which he would feed to himself in the Ruadh[2] Cow at Tallaght and then into the Good Woman at Ringsend and after her in at Conway’s Inn at Blackrock.’

In 1765 another popular Ringsend tavern was The Sign of the Highlander[3] which was run by Mrs Sherlock. The pub had a billiards table which you could play for two pence and was overseen by Mrs. Sherlock who acted as the marker for the games, the holder of any bets and as an adjudicator for any disputes that may arise. Her brother had emigrated to London where he was known as a great swordsman

‘who many years before had been victor in every broad-sword contest of consequence, at a time when the skilful management of that weapon was considered of importance in London’ [4]

One publican who bettered himself after his time trading in Ringsend was Richard Hill. In October 1781 he announced through adverts in the newspapers he was opening a new tavern at No.2 Crow Street off Dame Street. He had been running a tavern in Ringsend known as Clements for a number of years. By June 1782 he was off loading his premises in Ringsend and it was put up for lease. It was described as having ‘stables, a good kitchen, garden and a large assembly room, all in good order.’ Hill had taken over from James Clements who had traded since 1777. Both men were ship builders along the River Dodder and the River Liffey which was common that they also owned a local tavern where their workers not only received their wages but then encouraged to spend them. Clements went bankrupt and Hill took over the running of the tavern with little or no experience as an innkeeper. 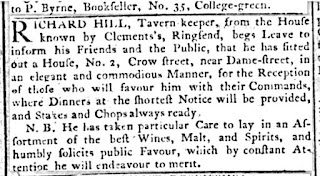 The nearest pub to the bridge crossing the River Dodder in 1788 was Harrison’s Tavern and the Dublin Chronicle reported on September 23rd 1788 that being exhibited at the tavern was ‘a radish of surprising magnitude, it measures in length one yard and a quarter and in circumference eleven inches and a quarter.’

By the early 1800’s the Ringsend Tavern on Bridge Street was a popular eatery. Originally run by John Howard in 1805 the running of the pub was in the hands of Mr. and Mrs. Madden. The pub was located approximately where Clarke’s public house is today. An advertisement in the Saunders Newsletter stated,

‘Howard’s is fitted in an elegant manner where clubs, parties etc can be accommodated in the shortest notice with best dinners in season and with Wines, Malt Liquors and spirits of superior quality.’

It also importantly added for the time,

‘Excellent accommodation for horses and carriages’

Howard had been a partner of Thomas Bray in the prosperous Ringsend Salt Works until a legal dispute erupted between Howard and Bray’s brother Michael[5]. 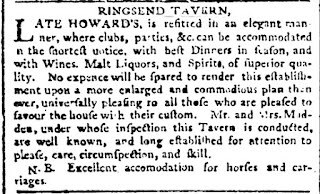 In the next episode we will be looking at the pubs popularly remembered at Fitzharris’s which was located near the bridge in a building now occupied by a pizza firm.

Check our social media platforms for dates and booking details for the forthcoming Walking Tour.

[3] Recollections of the Life of John O’Keefe, Volume One

[4] The Annals of Booterstown to Donnybrook

Posted by The Archivist at Wednesday, November 24, 2021