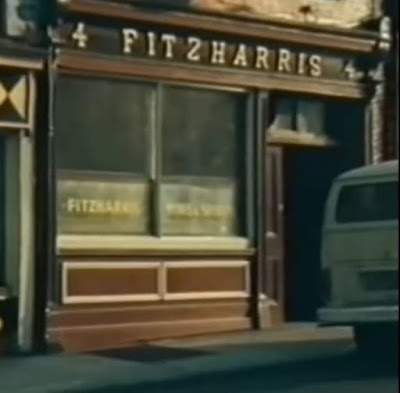 Welcome to part three of our look at some of the Pubs of Ringsend. In 2022 a Walking Tour will commence bringing you the colourful history of the many pubs and tales of Ringsend or Raytown as the locals know it. One of the now departed public houses in Ringsend but one of the most popular was known as Fitzharris’s for over a century. A popular place for the local dockers. Number 4 Bridge Street, now home to Domino Pizza’s, was also one of the earliest pubs in the village.

One publican who bettered himself after his time trading at 4 Bridge Street was Richard Hill. In October 1781 he announced through adverts in the newspapers he was opening a new tavern at No.2 Crow Street off Dame Street. He had been running a tavern in Ringsend known as Clements for a number of years. By June 1782 he was off loading his premises in Ringsend and it was put up for lease. It was described as having ‘stables, a good kitchen, garden and a large assembly room, all in good order.’ Hill had taken over from James Clements who had traded there since 1777. Both men were ship builders along the River Dodder and the River Liffey, which was common that they also owned a local tavern where their workers not only received their wages but then encouraged to spend them. Clements went bankrupt and Hill took over the running of the tavern with little or no experience as an innkeeper.

It was known as Harrison’s Tavern in 1782. The Dublin Chronicle newspaper reported on September 23rd 1788 that being exhibited at the tavern was ‘a radish of surprising magnitude, it measures in length one yard and a quarter and in circumference eleven inches and a quarter.’

By the early 1800’s the Ringsend Tavern, as it was now known, was a popular eatery. Originally run by John Howard in 1805 the running of the pub was in the hands of Mr. and Mrs. Madden. The pub was located approximately where Clarke’s public house is today. An advertisement in the Saunders Newsletter stated,

‘Howard’s is fitted in an elegant manner where clubs, parties etc can be accommodated in the shortest notice with best dinners in season and with Wines, Malt Liquors and spirits of superior quality.’

It also importantly added for the time,

‘Excellent accommodation for horses and carriages’

Howard had been a partner of Thomas Bray in the prosperous Ringsend Salt Works until a legal dispute erupted between Howard and Bray’s brother Michael[1].

In 1830, the pub was being run by John Eustace and his pub found its name in the newspaper for all the wrong reasons. John Higgins and George Eastwood were local fishermen who entered Eustace’s pub to have a drink. Eustace was also a fellow fisherman. The Dublin Observer then reported what happened next.

‘The deceased and Eastwood, the prisoner in custody for the murder, were fishermen living Ringsend, and had an altercation in the early part Saturday last, relative to some expressions which the latter (Eastwood) made use of towards a female member of the deceased’s family, which, however, were not much minded the latter, who offered shortly afterwards to shake hands with the prisoner, and have nothing more about the matter; but this was refused by Eastwood, who said on more occasions than one, ' I’ll have your life's blood, and make you drink before the day ends.” In the evening both parties met together in a public house belonging to a man named Eustace, of Ringsend, when, after sitting there a short time, and some conversation having arisen, during which reference was made to the original dispute, and the deceased again proffered the hand of friendship. Eastwood suddenly rose from his seat, and pulling out sharp pointed instrument, something like a dagger, plunged it into the body of his unfortunate companion between the fifth and sixth rib, and penetrated into the cavity of heart. The deceased bad only time to say (putting his hand upon the wound), He has done for me,” when he fell forward and immediately expired. His friends then brought the body to Jervis Street hospital.’

The Freeman Journal reported the testimony of the publican John Eustace,

'The prisoner (Eastwood) came in and commenced using irritating language to the deceased. Higgins desired him to go away, that he wished to have nothing to do with him. The prisoner still (continued to annoy him, when deceased gave him a shove. The prisoner then said, "1 will have satisfaction of you for that before I sleep.", This was about five o'clock. In a subsequent part of the evening, about an hour afterwards, deceased invited the prisoner to make it up, and asked him to take a drink of porter. His reply was, ‘No, I won't but I'll give you some of your own blood to drink before you go to bed.’ About seven o'clock witness joined the deceased (Higgins) in Eustace's public-house. Eastwood (the prisoner) was in the same room, but in a distant seat. He came over to where deceased and witness were sitting, and said to deceased, " You bloody villain, I'll have your life." Some words ensued, and deceased took the prisoner up by the collar and the leg and carried him over to the fire-place, where he laid him down, deceased observed, when he did so, " you see it is not worth my while to strike a boy like you;" deceased had his back turned to prisoner, coming back to his seat, when the later struck him in the chest deceased then observed, "Johnny, damn me but he has done for me, he has whipped it through me ;" deceased then fell without uttering another word; in the conversation that took place previous to deceased's lifting the prisoner over to the fire, the latter made some insulting allusions to the sisters of the former; the prisoner was tipsy at the time, he was more tipsy at the latter end of the dispute, when he struck the blow, than he was at the commencement, deceased was also a little " hearty;" he appeared to be some- what irritated when he lifted the prisoner off the ground.

Eustace’s son Joseph Junior then bought a pub on Thorncastle Street before his father sold the pub on Bridge Street. 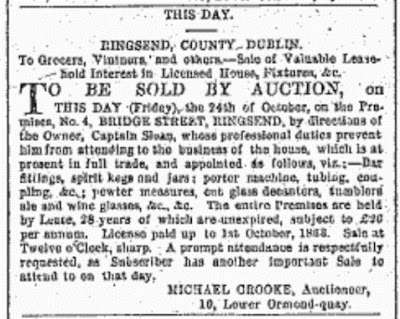 In 1862 the pub was sold once again by the now owner Captain Sloan who announced that he was leaving to concentrate on other business interests. The pub was purchased by William Heapes who then left the pub to his son Joseph. His daughter Elizabeth married local shipwright James Barry. Upon the death of his father in law, Barry took over the running of the pub. The pub was now being run by Barry and now the Fitzharris name enters the story. Laurence Fitzharris, originally from County Carlow, was employed as a barman in the pub next door at Number Eight, rising to the role of manager. When the pub at Number Four was sold by the family of the late William Heapes in June 1895, Fitzharris purchased the pub and put his name above the door. 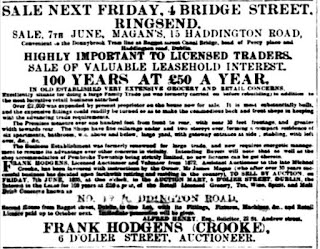 In 1914, the police were attacked on Bridge Street in the aftermath of ill feelings after the 1913 Lock Out. The police reported that they were showered with glasses and bottles thrown from the upper floors of Fitzharris’s by customers without the knowledge of the owner. Laurence Fitzharris passed away in December 1920 leaving the family to run the pub. He missed out seeing his daughter Eleanor (also known as Lillie) marry Sir John Esmonde in 1922. Esmonde served both as an MP in the British Parliament and as a TD for Fine Gael in the Dail. 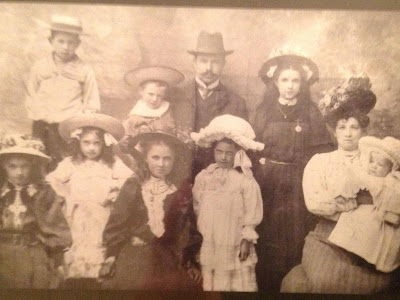 The Fitzharris Family as published by Martin Gueret

1948 was a traumatic year for the Fitzharris family. Mary (nee Moran from Wicklow), Laurence’s widow, passed away on January 7th 1948 and on May 22nd her youngest son Maurice also died. A relative, Maurice Gueret writing in Sunday Independent recalled his Uncle Maurice,

‘He was known in the locality as ‘The Hump' Fitzharris, for he was born with a hunched back, or acquired it when dropped as a baby. (There are two medical opinions on his story). Maurice was the baby of the family and, all his life, was very attached to his mother. In fact, he died just months after she did. ‘The Hump' was a cruel sobriquet, you might think, but Dockland could be an unforgiving place, and not a place for the sensitive soul.’

Following his passing, his sister Kathleen Butterly applied for the transfer of the licence. In 1966 the licence was transferred to another sister Margaret who had married Phillip Meers on August 3rd 1926. Laurence and Mary’s sons Laurence Junior died in New York in December 1954 and John died in April 1967. According to Maurice Gueret was sold by Ethel Fitzharris who had married Jack Fitzharris 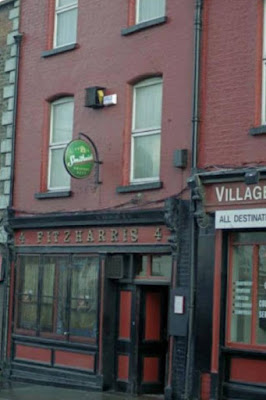 In the new century Fitzharris’s closed as public house and for a number of years operated as an off licence before becoming a branch of Domino’s Pizza. 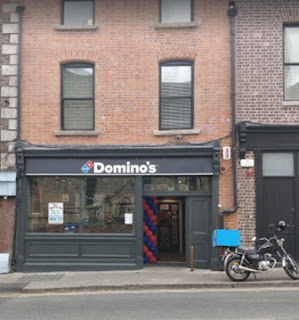 In the next episode of this series we will look at the wonderful and colourful history of another departed pub of Ringsend once known as The London Tavern but for over a century known more popularly as The Old England Tavern.

Posted by The Archivist at Wednesday, December 01, 2021