The next pub on our travel through the history of Ringsend’s pubs will take more than one post to cover. Number Eight Bridge Street Ringsend is today The Oarsman but it has a wonderful and colourful history. The first time that alcohol was served here was in 1816. In the 1830’s the publican delivering service was John Madden. By 1837 he had been replaced by John Gilligan who was in turn succeeded by his wife Anne Gilligan up to 1860 when William James Tunney took over. Tunney lived with his family at 35 Bath Avenue and would later add to his portfolio by buying 10 Haddington Road which is now Smyths public house. His brother Michael also owned a pub in Ballsbridge. It was Tunney who installed the artistic façade and a pediment that displays a Irish round tower, a Celtic high cross and an Irish Wolfhound. The stuccoworks company of William Burnett and James Comerford created the stucco to dress up a building with the exaggerated ornamental impulse that was a feature of the Celtic Revival. At roof level on the Oarsman, within a central roundel flanked by urns, there is a stuccoed escutcheon displaying a collection of nationalist symbols – a round tower and a Celtic high cross guarded by an Irish wolfhound. A harp once surmounted the arrangements atop the now empty plinth at the apex. This is Dublin’s last surviving example of stucco art being used to portray romantic nationalism in a form that was once popular on public houses. Burnett and Comerford would also famously design and build the façade of the famous Irish House on the corner of Woodquay and Winetavern Street, sadly demolished now. 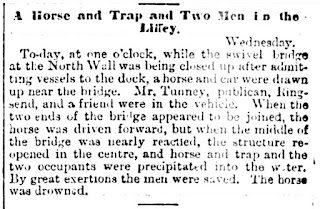 Tunney’s also found itself into one of the twentieth centuries greatest literary work, Ulysses by James Joyce first published in 1922. Set in 1912 Dublin, it follow one day in the life of Leopold Bloom as he crosses the city including a visit to Ringsend. According to the Ulysses guide,

‘Ulysses depicts several such women: the "bent hag" in Calypso that Bloom sees in front of "Cassidy's, clutching a naggin bottle by the neck"; Mrs. Dignam in Circe, "her snub nose and cheeks flushed with death talk, tears, and Tunney's tawny sherry"; Molly in Penelope, who thinks, "I’ll have to knock off the stout at dinner or am I getting too fond of it the last they sent from O’Rourke’s was as flat as a pancake." In these details Joyce shows women drinking from all the major food groups—hard liquor, wine, beer—and he shows public houses doubling as package stores. O'Rourke's is the pub that Bloom passes in Calypso, and Tunney's is mentioned twice in one section of Wandering Rocks, when Patsy Dignam thinks of his mother sipping "the superior tawny sherry uncle Barney brought from Tunney’s," and of his father's frequent visits to the pub: "The last night pa was boozed he was standing on the landing there bawling out for his boots to go out to Tunney’s for to booze more."

The pub also found itself in the records of the Bureau of Military History as a witness statement of Michael Noyk explained. It referred to a barman who worked in the pub Michael Vaughan.

‘The 4th witness, Michael Vaughan, who was afterwards killed during the Civil War at Leeson Street Bridge, said; He was an assistant in Tunney's public house. On the 21st November he went out about 9.30 to get a newspaper - "The Independent" - in the shop near him. He spoke to the man in the shop for about 4 minutes and then went back to his own shop to get his breakfast when he saw Whelan coining out of the chapel gate. (Tunney's is just opposite Ringsend Chapel). Vaughan bade Whelan the time of the day. crossed had crossed the street to speak to him and they spoke for about two or three minutes. Vaughan said he would have to be going as he had to be at Westland Row Mass at 10.30. Witness said a Mr. O'Connor introduced him to prisoner about three weeks before the 21st November. He added that the day was fixed in his memory by the deaths of the men who were killed that day.’

Michael Vaughan would leave the pub employ and join the new National Army. On June 29th 1922 he was killed in an ambush on Leeson Bridge when a grenade and shots were aimed at the car in which he was travelling. Clare born Patrick McCarthy whose address was given as The Shelbourne Bar, Bridge Street, Ringsend was awarded a military service medal for his service during the 1917-1921 revolutionary period as a member of K Company, 1st Battalion of the IRA Dublin Brigade. 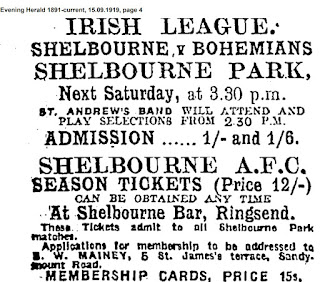 William Tunney died on St Patrick's Day 1912 and for a number of years his family continued to run the pub into the early years if the new Irish Free State. It was eventually sold to Michael McCloskey, who’s later family members would run a pub for many years in Donnybrook. McCloskey called the pub the Shelbourne Bar due to its proximity to the Shelbourne sports ground on nearby South Lott’s Road. 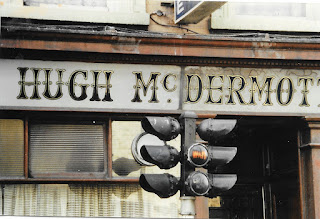 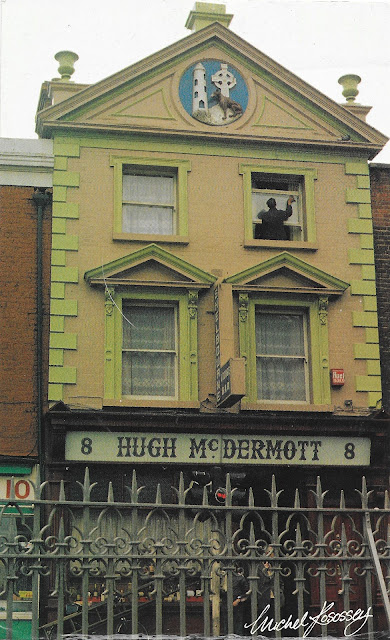 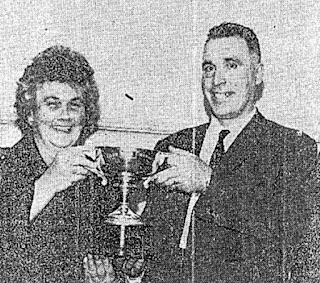 Mr. Hugh McDermott presenting a cup to a winner owner at the Greyhound racing at Shelbourne Park

Following Michael’s death in January 1945, his widow Eleanor (also known as Ella) took over the running of the pub along with her son Michael Jnr. Ella died in 1954. The McCloskey’s then sold the pub to Hugh McDermott. McDermott was behind a scheme, who at the time was President of the Vintners association, that offered a scholarship to those who could not otherwise afford it, this included an extensive stay in the Gaeltacht. The pub was sold by the McDermott family and in the 1980’s Ballyconnell, Co. Cavan native Bob Prior and his wife Monica, owned both the Oarsman, as it had been renamed, and the Yacht on Thorncastle Street. Bob Prior had been an owner of the Boars Head on Capel Street prior to his arrival in Ringsend. 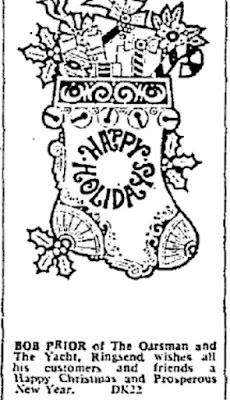 Today the Oarsman is a popular local pub in the heart of Ringsend offering a wide range of choice for both the drinker, diner and coffee connoisseur. 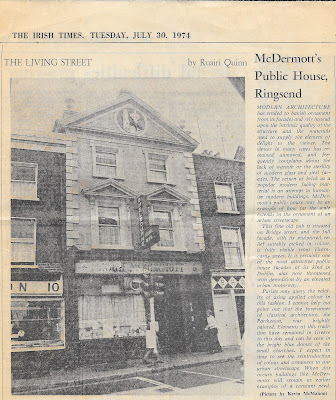