Welcome to Episode Five of our series on the pubs of Ringsend. These stories will form the basis of the forthcoming The Historic Pubs of Ringsend Walking Tour in 2022 and a book on the history of the pubs in both Ringsend and Sandymount. Today we will look at the story of another pub in the Village, 'Sally's'.

For a generation of TV viewers, the ‘Sally O’Brien and they way she would look at you’, was the tag line for a Harp lager advertisement and Sally O’Brien’s was also the familiar name of the public house located at 16 Thorncastle Street, Ringsend. Back in the 1850’s John Collins was the publican at Sixteen followed by Edward Kearns in 1859 who renamed it The Ark Tavern. His son Michael took over the running of the pub and in 1874 and after his father passed away on June 14th 1877, the pub was sold to Laurence Byrne. While the Byrne’s maintained their ownership over the pub, it was leased out to William Carpenter in 1877 before returning under the Byrne family control in 1891 when Laurence’s son Joseph took on the pub.

The Byrne’s sold it in 1901 to Peter Clowry. From Bagnalstown in County Carlow, Clowry did not have the easiest of times in Ringsend. His brother Michael was drowned in September 1901 with three other men when the boat they were fishing from, capsized and sank near the Pigeon House. His first wife Agnes (nee Byrne) died in November 1911 and was mother to eight children. He married a second time to Offaly born Anna who herself passed away in 1919 following the loss of her husband Peter Clowry on New Years Eve 1915. His death certificate listing double pneumonia as the cause of death. The Dublin Daily Express when reporting his funeral described his passing as,

‘His death removes from our midst a very popular personality and a man whose charity and benevolence will long be missed in Ringsend, where he lived practically all his life.’ 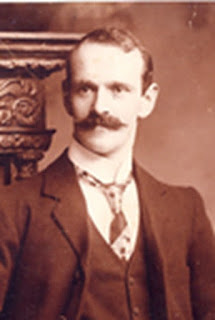 As was typical of the time where the female sex took second place to their male counterparts when Peter Clowry’s death notice appeared in the newspaper and reports of the subsequent funeral, there was no mention of any of his daughters, including Laura, yet both his sons and sons-in-laws are mentioned. 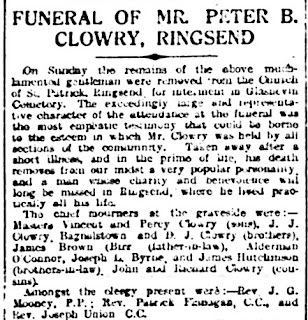 The day after the funeral, a preliminary notice for the pub’s sale appeared in the newspapers. The following February the pub was sold to Robert Woodcock.

As was typical of the time where the female sex took second place to their male counterparts when Peter Clowry’s death notice appeared in the newspaper and reports of the subsequent funeral, there was no mention of any of his daughters, including Laura, yet both his sons and sons-in-laws are mentioned.

One of the little known stories of the 1916 Easter Rising was the sad death of Ringsend publican Robert Woodcock. Robert and his brother Samuel were born in Mothel, Co. Kilkenny just north of Kilkenny city. After serving his apprenticeship in a public house in Dun Laoghaire, Robert purchased his first pub on Tyrconnell Road, Inchicore in 1909 on the banks of the Grand Canal known as Murrays, where the Black Horse pub traded for many years. His brother Samuel also bought his own pub on the corner of Thomas Street and Meath Street, now Baker’s Corner. The Woodcock’s, as well known publicans in the Dublin, attended the funeral of Peter Clowry but also spotted an opportunity. In February, thirty three year old Robert purchased 16 Thorncastle Street from Clowry’s estate for £3,200 and immediately began trading. Robert was an active member, like many of his fellow publicans in the South Dublin Union.

Two months after his arrival in Ringsend, he decided to use the Easter bank holiday weekend to travel home to Kilkenny to see his elderly farmer father, a widower. He travelled down in his motorcar on Saturday and decided to return on Monday but in his absence from Dublin, rebels from the Irish Volunteers, Cumman na mBan and the Irish Citizens Army took to the streets of the capital and seized control of a number of buildings. One of the battle sites seized mainly by members of the Citizens Army was St. Stephens Green. As word of trouble spread around the country, Robert decided to drive back to Dublin to look after his businesses. He arrived first at Tyrconnell Road and decided to drive across to Ringsend but he met a DMP policeman who asked him to give him a lift to Phibsboro.

They drove down Harcourt Street onto St. Stephens Green where they were met by rebels on the road who held them up at gunpoint. The two men were taken prisoner and removed into the green itself where they were greeted by Countess Markiewicz and Michael Mallin. Woodcocks’ car was made into a barricade at the top of York Street. Robert Woodcock was tied to a tree in the park while the policeman joined other prisoners being held in the gate house in the park. At one stage after a number of hours of being tied up, one of his captors decided to release Woodcock but another rebel recognised Woodcock and harboured ill feeling towards him as he appeared to side with the employers during the 1913 Lockout and was suspected as being anti Larkin. He remained a prisoner in the park throughout the night but by Tuesday as the British troops on the roof of the Shelbourne Hotel began to attack the rebel forces. The rebels, who had dug trenches in the park, had no answer or cover from the machine fire that was now focused on them.

The commander’s decision was to retreat from the park itself and take the College of Surgeons as their headquarters. Woodcock was taken across to the building but his exposure throughout the previous night had an immediate detrimental effect on his health.  Woodcock was seriously ill. He was taken by ambulance to nearby St Vincent’s hospital on St. Stephen’s Green, where he died twenty minutes after being admitted on April 28th of double pneumonia ‘brought on by exposure’, becoming a fatality of the Rising.

On May 16th the Evening Herald reported that on that day,

‘At the City Sessions, before the Recorder Mr. T.R. Holmes solicitor applied on behalf of Mr. Samuel Woodcock of 45 and 46 Thomas Street that he should be at liberty to carry on the licensed trading in the premises 16 Thorncastle Street, Ringsend until the Quarter Sessions. The licensee, Mr. Robert Woodcock, applicant’s brother, had been kept prisoner by the insurgents in St. Stephens Green during the recent insurrection and died subsequently from pneumonia brought on by exposure. The recorder granted the application.’

The Freeman Journal reported in June that Samuel had been granted permission by the Dean’s Grange Burial Board to disinter his brother’s body and have it removed to Kilkenny. The Journal did report however that Robert had been accidentally shot during the rebellion. According to the Irishmedals.ie website,

In July, Robert’s brother Samuel applied to the courts to transfer the license into his name which was approved. The pub was sold two years later. The sadness of his passing was compounded that when the at time controversial memorial wall to the victims of the 1916 Easter Rising was unveiled at Glasnevin Cemetery, the memory of Robert Woodcock was somewhat obliterated when the engravers decided his name was ‘Richard Woodcock’. Surely this should be corrected immediately to honour both his memory and show respect to his family. 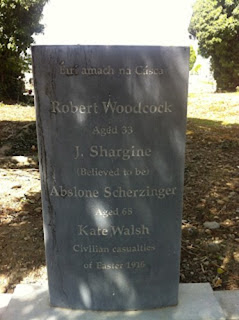 Following Robert’s untimely death, the pub was sold in 1918 for £4,400 to Patrick Fagan, a well-known Dublin publican. The Fagan brothers, Patrick Fagan’s brother Bernard at one time owned the Yacht pub just up the street from Number Sixteen, ran the pub until Patrick died on July 21st 1945 leaving his widow Margaret in charge until 1947 when they sold it to Patrick Smith. It then became the property of Patrick Cassidy, who had served during the War of Independence in the 3rd Battalion of the Old IRA and would later own the Summit Hotel in Howth. His father James at one time owned the public house located just up the street at number eight. He died in January 1975. The pub changed hands once again and became the property of the Colgan Group of pubs which included Toners and the County Bars. 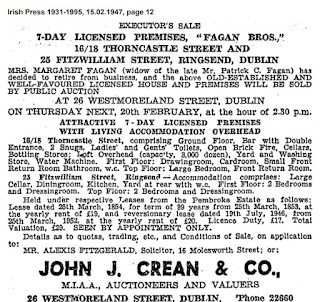 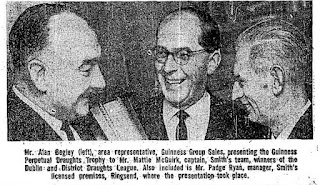 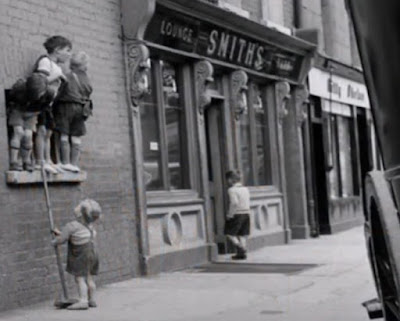 It would later become known as the iconic Sally O’Brien’s, then as the Shipwright and reverting back to Sally’s before it closed briefly in 2021 following the death of its owner Eoghan Breatnach and a legal case over the pubs lease. In 1987 a video was shot in Sally O’Brien’s featured the Dubliners and Shane McGowan of ‘The Pogues’ and numerous scenes in the movie ‘Agnes Brown’ starring Angelica Huston were filmed outside and inside the pub. 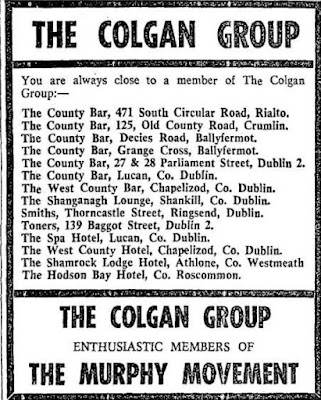