I thoroughly enjoy the excellent #OnThisDay section of The Irish at War @irelandbattles, and the tweet today Wednesday January 26th 2022 looked back at an event ninety nine years ago. The phrasing of the tweet intrigued me. It read,

‘Terenure College, Dublin. Three soldiers were badly injured, the driver was blown 30 yards away & another had his mouth torn of in the blast. Three civilians were also injured.’ 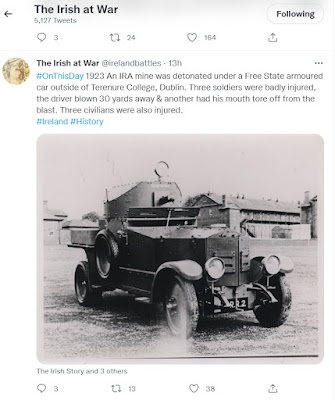 It tweaked my interest with the ‘three civilians’ report, perhaps an afterthought, unimportant to the story. The severity of the blast meant that newspapers in Britain including the Leeds Mercury reported that one soldier was killed and seven injured. The truth was that Irishmen planted a land mine to kill fellow Irishmen injuring other fellow Irish citizens. So, what was the story.

Terenure was a hot bed of activity during the Civil War with numerous bombings, shootings and raids that netted weapons and explosives. On that night two National Army Crossley tenders departed Tallaght Camp to patrol the area as they did most nights since the New Year. Shortly after 11.15pm on that Friday night as the tenders reached the walls of Terenure College opposite Bushy Park, a land mine exploded with such force that the lead tender that the bulk of the impact had its radiator thrown 30 yards from the blast and one tyre was found almost 250 yards from the scene. The landmine had been planted by anti-treaty forces operating in the city during the Irish Civil War.

There were six national soldiers on board the tender. Two were brothers Edward and Patrick Confrey. Edward had joined the National Army in March 1922, while his brother Patrick, who lived at 53 Marrowbone Lane with his young wife, joined in May 1922[1]. The Berney brothers from Bray, included a Quartermaster and the driver who was thrown clear of the vehicle after the blast. Also injured were Private Matthews and Dalkey born Sergeant Greene.  The sound of the blast was heard in the National Army headquarters at the Portobello barracks who immediately despatched reinforcements. The terrible sound that blew in many residential windows, also attracted the attention of Fathers Griffin and Gavan from Terenure College and Father Hickey from Terenure parish church who were the first on the scene to tend to the wounded. 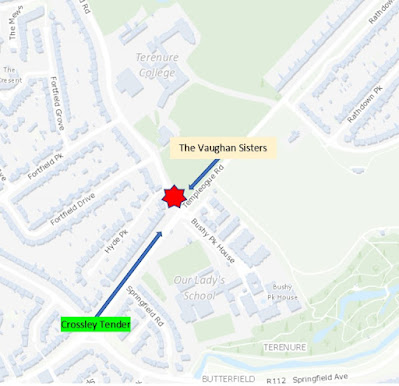 Two women (not three civilians as reported) who were injured were sisters Annie and Lily Vaughan from Mountpleasant Square[2] although newspaper reports placed them on the Terrace. They were the daughters of a Church of Ireland school teacher and were walking home towards Templeogue when the land mine exploded. The walking wounded were taken by car to Doctor Kennedy’s house in Terenure Village while the others were taken to two hospitals by Rathmines Ambulance. Quartermaster Berney was taken to Vincent’s Hospital while the two sisters, the Driver and the Confrey brothers were conveyed to the Meath Hospital.

Edward Confrey was badly injured with serious facial injuries. He was unconscious for almost three weeks and after his discharge from hospital, like his brother he was medically discharged from the Army. In May 1924, Edward’s compensation claim was a question raised in the Dail.

‘OFFICER'S COMPENSATION CLAIM. Major Bryan Cooper TD asked the Minister for Defence whether he is aware that Mr. E. Confrey, late Lieutenant Q.M.G. Staff, was discharged from the Army without being medically examined and whether in view of the fact that this officer was injured in an explosion of a land mine at Tallaght in January, 1923, and  is claiming a pension in respect of such injuries, he will take steps to have him medically examined and the claim decided on forthwith. Mr. Duggan (Minister) I am aware that Mr. Confrey was, through an oversight, discharged from the Army without being medically examined. No claim for compensation appears to have been received from him, but if one should now be made steps will be taken to have him medically examined and his claim considered as quickly as possible.’

From the Army magazine an tOglach May 24th 1924 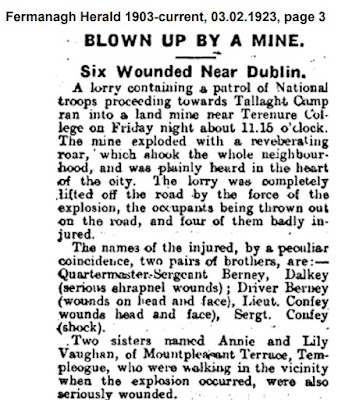 Edward died in 1938 aged just 36 years old, while Patrick died in 1952 with both men buried in Deansgrange cemetery.[3]

Posted by The Archivist at Wednesday, January 26, 2022