The Americans Are Coming

For many when you mention the United States and the Easter Rising the first association is with Eamon DeValera. DeValera was the Commandant of the Boland’s Mill garrison and when court martialled by the British Crown was sentenced to death. It is assumed by most historians that this death sentence was commuted to life in prison due to the fact that DeValera had been born in 1882 in New York. But DeValera was not the only US citizen involved in the Easter Rising. Jeremiah Lynch also known as Diarmuid Lynch was born in County Cork in 1878 but moved to the United States in 1897 after a stint working for the British Civil Service in London eventually becoming a naturalised US citizen. In 1908 he retuned to Ireland and became involved in the nationalist movement. During the Easter Rising he was Aide de Camp to James Connolly in the GPO. He was arrested after the rising and was sentenced to death for his part. Following the direct intervention of US President Woodrow Wilson his death sentence was commuted and he was released with most of the other combatants of the Rising in 1917. 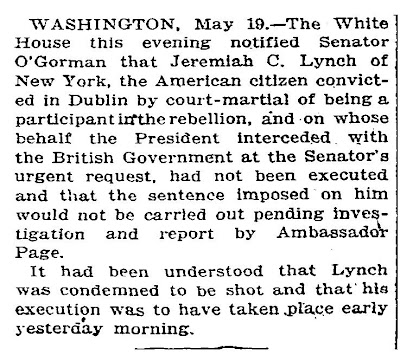 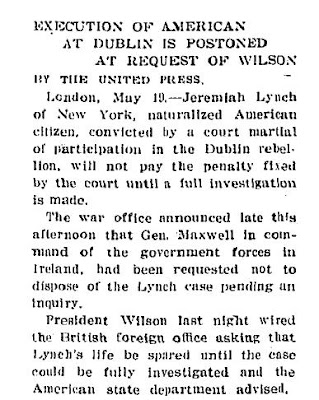 Another United States citizen jailed for his part in the Rising was James Mark Sullivan. Born in Killarney, County Kerry in 1872, his family moved to America when he was young. Educated at Yale University, Sullivan became a lawyer in New York. At the age of forty he married twenty eight year old Limerick heiress Nell O’Mara. In August 1913 he was appointed US Ambassador to Santo Domingo (modern day Dominican Republic) but he resigned some months later following the emergence of fraud allegations.

He returned he Ireland and took part in the Easter Rising eventually sentenced he served his time in Kilmainham and Arbour Hill. According to Pat Lavelle "My brother in law Dick Humphreys told me that Uncle Jim Sullivan was the life and soul of the prisoners up at Kilmainham gaol. Dick knew because he was one of them. He said that they were all feeling very gloomy, most of them sentenced to death or likely to be, and that Uncle Jim came in on them like a fresh breeze with his hearty laughter and his big voice and American wisecracks and without a tremor of fear; for who could touch an American citizen if all came to all", apparently he was under threat of execution "but not executed due to his American diplomatic passport". Sullivan was the founder of The Film Company of Ireland which produced a number of early silent movies starring Abbey Theatre actors but these films were destroyed during the British bombardment during the Rising. Sullivan died in August 1935. 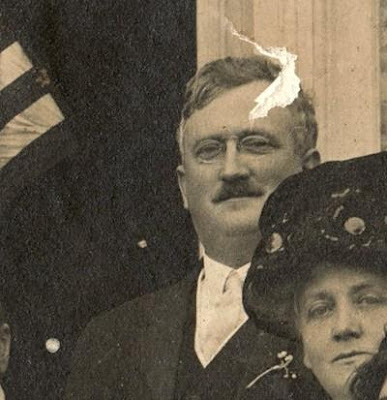 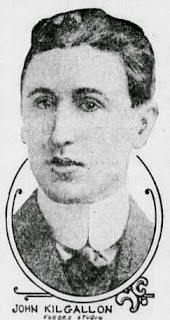 Perhaps the most famous American involved in the Easter Rising was Eamon DeValera who would in the years after become President of Ireland. But other US citizens joined the fray one of these was John A. Kilgallon. He was born in the village of Far Rockaway, New York in 1891. His father Luke and mother Nora (nee Walsh) emigrated from County Mayo. They married in the United States and John was their only son.

Luke earned a living as blacksmith who wisely learned how to fix cars and built a prosperous auto repair and gas station. He patented a device to put tires onto the rims and became financially wealthy in real estate. 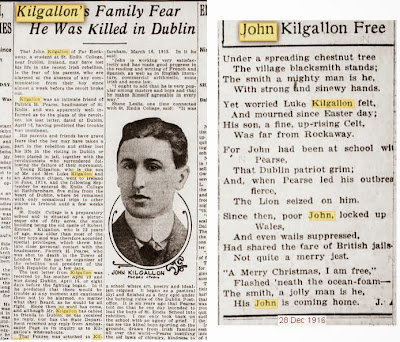 In 1914 he sent his son to St. Enda's school in Dublin. There John Kilgallon was decisively influenced by the school's founder, Patrick H. Pearse, one of the leaders of the 1916 Easter Rebellion. Known as "The Yank" John drilled as part of a unit known as "Pearse's Own" consisting of current and former St. Enda's students. But how did this photographer end up at St. Enda’s. Firstly his parents had the means to send him to Ireland and study at St. Enda’s with the attendant living expenses covered. 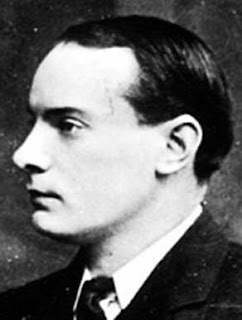 Secondly he was basically on the run. On August 20th 1912 and not even twenty one John had taken a car from his father garage and attended a party. Following the party just after 2am in the morning the car was packed with ten people and according to police reports the car was travelling at 65 mph when it struck a farm wagon, catapulting the occupants from the car and over turning.

The most seriously injured was sixteen year old Cecilia Welstead who was crippled for life following the accident. In January 1915 Ms. Welstead sought $50,000 but the Kilgallon family had removed their son from the jurisdiction and sent him to Ireland John’s father denied in court that his son’s departure had anything to do with the court case. Ms. Welstead was awarded $20,000 in damages by Justice Scudder.

He was in the Post Office during the thick of the combat, and surrendered with Pearse after six days of heavy fighting. According to Desmond Ryan’s BMH witness statement

"Holy Ge"!, cries John A. Kilgallon, in his American accent to two bewildered postal officials: "This 'ain't no half-arsed revolution! This is the business.”

After his capture, Kilgallon with an address at The Hermitage Rathfarnham was sent to the Richmond Barracks before being marched to the docks and taken first to Stafford Jail and then to Frongoch Prison Camp in Wales where he became a hut leader. The authorities offered to release him if he swore an oath of allegiance to the British crown. John rejected this offer. This had been stated in a letter to his father published in the Brooklyn Eagle in February 1917 which had been smuggled out of Frongoch by Annie Buffin the sister of Eamon Buffin who was also a student at St Enda’s and is remembered as one who had raised the flag above the GPO at the start of the Rising. America's Ambassador the Court of St. James, Walter Page, pressed the British government to release "The Yank" with US newspapers referring to Kilgallon as a ‘schoolboy’. Kilgallon was released on Christmas Day 1916.

While their son was in Frongoch, Luke Kilgallon received a letter in the post on May 11th from Padraig Pearse which reported on his son’s progress at St. Enda’s. Pearse said ‘he is very well and has made genuine progress. He has certainly benefited from his time at St. Enda’s.’ The letter was an acknowledgement of fees paid to the school on behalf of John Kilgallon. 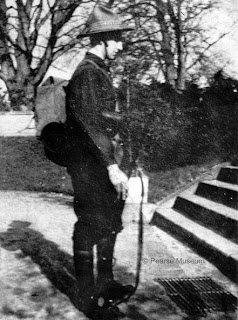 Part of John ‘the yank’ Kilgallon legacy to the rising is a series of photographs he took on Easter Sunday at St Enda’s of comrades on the day before the Rising begun. 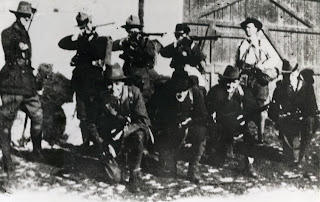 John served his native country in World War I as a machinist in the United States Navy. From his service record, it appears that spent the entire war in stateside naval bases. John died in 1972 at the age of 80.

Posted by The Archivist at Wednesday, February 15, 2017